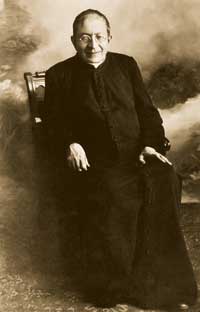 Place Piastowe in 1892 year was a modest village, located on a beautiful hill near Krosno. He was visited by Fr.. Bronisław Markiewicz with a poor traveling trunk. However, he had two valuable treasures with him, which he brought all the way from Italy : the image of Mary Help of Christians and the portrait of Fr.. John Bosco. They were to be the source of his power in working for great ideas. He wanted to transplant the Congregation of Salesian Fathers into Poland. He wanted, that it, through the factories for poor Polish youth, would prepare them to be industrious, Christian life. Presbytery, in which he lived, she didn't even have a bed, not to mention the other necessary things. So he had to do everything. Despite the initial difficulties, at the end of the same year, he gathered several boys around him. They lived with him - they ate together, they rested and prayed. He quickly won their hearts and trust. The number of boys slowly increased. More and more of them applied, therefore he made a bet for them. He wanted to teach them practical professions. However, he had many problems with running the plant. There was no adequate funding. He was even forced to give the boys food. Even so, they were often hungry. During the classes they looked at the sun, is it almost time for mealtimes. And there was still a shortage of money for food.

We have to remember, that in time, when Fr.. Markiewicz began his work on the poorest youth, our country was under partitions. In all partitions, the economy remained at a very low level, and the worst was in Galicia. The villages were overcrowded. Minor, primitively worked peasant farms could not feed everyone. There was almost no industry, and a few factories, which were already working then, they were in the hands of foreign capitalists, who wanted as much profit as possible, even at the expense of the laborer and injustice for his work. Therefore, both peasant families, as well as the working class struggled with poverty. They couldn't afford to send their children to school, so that they can develop their abilities there. You've probably read the short story ,,Janko muzykant ", "Smoke" or a poem ,,Hansel did not live to see ". Have you not been touched by the fate of these children ? Just the poorest, vulnerable, hastened Fr.. Markiewicz with help.

W 1898 In the year, a dozen or so boys from the workshop assumed a religious dress. It was the actual beginning of the new Congregation of the Fathers of Michael, although there was no approval from church authorities yet. They wanted to live together, pray together and work for others.

Ks. Markiewicz also started gathering girls. They took over the housework, they were cooking, were washing… Later, a female Congregation of the Sisters of St. Michael was formed from them. With time, they also began to run educational institutions for poor girls. Both congregations gained the recognition of the Church and society at that time, as their work began to bear fruit.

Ks. Bronisław Markiewicz sacrificed his life, to meet the needs of his time. He could not look indifferently at the poor youth, which no one was interested in. He was aware, that she will be the future of the nation, which had been wrecked in captivity for so many decades. He wanted to teach young people the right approach to work in his factories, respect and love her. He instilled this belief in youth, that the material recovery of the country through work can effectively contribute to the restoration of freedom. Due to this attitude to work, Fr.. Markiewicz was ahead of his time, in which the slogans of social work have already begun to be slowly implemented. It was at this time that the Church brought them to the attention of the whole world in her encyclicals. He demanded a change in economic relations, eliminate social injustice and take an interest in the poor and the exploited. Ks. Markiewicz worked alone all his life. He stayed like that until the last moment. His work was the best proof of the love of another human being, nation and homeland.