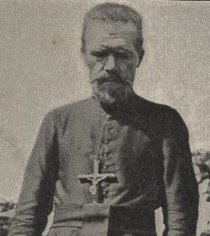 A man will never be so frustrated by hunger or hard work, how complete loneliness can bother him. When a man has no one to speak to in his language, to complain, tell about his helplessness - he feels an acute lack.
Father Jan Beyzym, who went to Madagascar to visit the lepers, he consoled himself by this, that at least in letters he can open his heart to someone. Although he knew, that his letter would not reach his confrere in two months, Czermiński's father, editor of "Catholic Missions" in distant Poland, however, he enjoyed writing the letters. In one of them he writes like that :
„…I will tell you openly, that while writing this letter and cry, and I wanted to laugh. I became childish in my old age. There is no shelter for lepers, and in my mind it was already a shelter forested with birch, a church planted around with birch trees and flowers, and on the altar there is a painting of the Holy Mother of Częstochowa decorated with branches of Polish birch…”
When one and a half years earlier, in November 1898 year, decided to leave his beloved Chyrów and his youth, to go to Madagascar and take care of a shelter for lepers, he knew, that it will be a difficult and dangerous job. However this, what he found, exceeded his worst feelings. Szumnie called "shelter", it's a few miserable huts, in which lepers nested. These shacks were almost falling apart, threatened to collapse in stronger winds and did not protect against rain at all. But the worst part was the hunger. Yet, if anyone here among the lepers was dying, and they die often, it's not so much leprosy, how much of hunger, cold or dirt, or for all of these reasons together. But Father Beyzym could not help it. There was no money. The colonial government cared not for the sick at all. What's worse, it was talked about, that lepers can earn their livelihood by tilling the land themselves. But Father Beyzym did see, that it is impossible. How lepers can till the land, when leprosy destroyed their feet, he stripped his fingers, and covered his whole body with terrible wounds ? No wonder then, that corruption was rampant among those forced to beg, drunkenness and theft. And father Beyzym came to them, to tell them about God, about love, about changing life.

How Father Beyzym wants to fight, to improve the fate of your "black chicks", restore their humanity to those disadvantaged by fate ? He knew, that it is not enough to give people bread, but they must be given livable living conditions. You need a real hospital. But for such a hospital to be established, you have to have a lot of money. Where to get them ! Even rice and basic necessities were missing.

Father Jan Beyzym trusted the Holy Mother. He entrusted her care with the fate of his mission. He also believed in the good hearts of his countrymen. Felt, that he can do something with them, to remedy these misfortunes. So he directed his appeal to the Poles. So what, that they were poor themselves, oppressed by the partitioning powers and had no free homeland ? After all, this is also true, that only the poor and suffering can truly understand the needs of the poor. The poor are always the most victimized. He believed, that a great work will arise out of the small sacrifices of his countrymen. I was not disappointed. People helped him, who knew how to take away from their mouths, though they had never heard of Madagascar before and had no idea about leprosy. But for this they had a heart and were able to respond to Christ's call of God's love in their neighbor.

For many years, small donations were collected for the construction of a shelter. Father Beyzym had to overcome many difficulties and obstacles. He himself had to roll up his sleeves and work for many days, before his life's work - a hospital for lepers - the work of a Polish missionary and the dedication of Polish Christians. How happy the day was 10 of August 1911 year. The first patients could be treated in a poor hospital. The first time they were truly clean and able to lie down in hospital beds. They didn't need to worry about it, what will they eat today and tomorrow. Persevering love won. Such joy was brought by sacrificing a little bit of my penny for others and opening our hearts. After all, the sick are God's children.

When the sick went to the hospital, and the nuns who came to take care of them, Beyzym's father felt, that one goal of his life had been achieved. However, he did not stop there. Where was the misfortune, there he wanted to come to the rescue. He found out, that Polish exiles live in terrible conditions in Sakhalin, deprived of pastoral assistance. I want to go to them. But, apparently, Christ did not want this sacrifice. Father Beyzym, while taking care of the sick, contracted leprosy himself. On oral, he sowed, toil, and the fruits of his difficult, his successors gathered pioneering work. The disease, suffering and evil have overcome love. The disease, however, wreaked havoc in an organism exhausted by excessive work. 2 October 1912 year ended his life. If you have a spare moment, read the book by Teresa Weyssenhoff: ,,Homeland by choice ", or published in print "Letters of Father Jan Beyzym TJ, apostle of lepers in Madagascar ". You will learn more about this Polish hero from there, who knew how to show true love to his neighbor, who so loved his neighbor, like Christ of each of us.