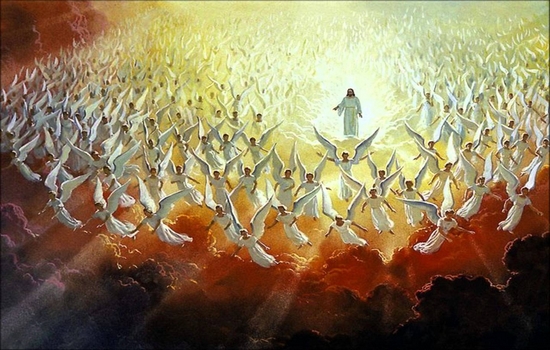 All people die. I know, that someday I will end my life on this earth. But I believe the words of Christ, that the whole world will be changed on the day of his coming in glory. In the Sunday Eucharistic Assembly, I confess : ,, And I look forward to the resurrection of the dead and eternal life in the world to come ". So I will also exist. But will it really be me? ? Will I be the same man, who now lives on earth, works, dreams of a better future and wants to live ? How is it possible, since after the ages of my body there may not even be a trace of it ? Christians in the Corinthian community asked themselves similar questions. Some of them even began to doubt the resurrection. The answer to their questions and doubts was given to them by Saint Paul the Apostle. You will hear the same answer more than once during liturgical gatherings.

We will all be resurrected

“Christ is the first to be risen from the dead, what have died. […] And as in Adam, everyone dies, so also in Christ will all be made alive […]. Christ first, then you, what belong to Christ, at his coming. The end will come at last, when he entrusts the kingship to God and Father, and when he overcomes all dominion, Authority and Power. […] As the last enemy, death will be conquered. […]
Here I am announcing a secret to you : not all of us will die, but we will all be changed. In one moment, in the blink of an eye on the last trumpet - for the trumpet will sound - the dead will rise intact, and we will be changed. You have to, that, what's destructible, it was clothed in indestructibility, a to, what's fatal, to be clothed in immortality. […]

Thanks be to God for that, that he let us be victorious through our Lord Jesus Christ. Therefore my beloved brothers, be steadfast and steadfast, always self-centered in the work of the Lord, remembering, that your toil is not in vain in the Lord " (1 Disease 15, 20-26. 51-58 - Lovely. Christ the King ; 8 Sun. during the year ; Mass for the Dead).

This, who spoke, that there is no resurrection, Paul the apostle responds: There is a resurrection, for Christ is risen from the dead as the first man from the dead. He is the guide to the resurrection for all people. His coming in glory will begin a new era in world history, because it will be the ultimate conquest of death, sin and satan. To emphasize the grandeur of this event, the apostle expresses himself in an apocalyptic style by speaking, that "the trumpet will sound". This expression meant, in the prophets of the Old Testament, the revelation of the invisible God himself to man.
For only at Christ's coming in glory will God be fully revealed. This coming will be a moment of mysterious transformation for all people. All the dead will arise alive in a body that cannot be destroyed, and the living will be transformed into immortal men in the blink of an eye. Only then will all Christ's members be fully saved in God's Kingdom.
From the moment of Christ's resurrection, the hope of a glorious resurrection shone forth for all people, who are saddened by the necessity of death. A Christian unites himself with the risen Jesus at baptism and belongs to him from then on. Therefore, St.. Paul calls on all Christians to make the highest sacrifices, because the joy of eternal life with the risen Christ and with friends, with whom we have become familiar on this earth, it surpasses all human imagination. Our efforts will not be in vain.

Man in the full kingdom of God

All will be resurrected, good and bad. But nobody knows, When will it happen. Nobody knows either, how the resurrection will be accomplished. However, we know, that Christ has promised to resurrect us to new life : Who eats my flesh and drinks my blood, has eternal life, and I will raise him up on the last day " (J 6, 54). We trust his words. He will not disappoint our hope. For the good, the Resurrection will consolidate for ever this life united with Christ, they started on earth, especially through participation in the Eucharist. On the other hand, for the wicked it will be the preservation of this life for ever beyond the communion with Christ, which they consciously and voluntarily choose on earth, when they commit mortal sins.

However, the life of God's Kingdom will not be the present life simply improved and extended indefinitely. The work of creation will then receive completely new conditions of existence, completely in tune with the perfect rule of the Spirit in him
Divine. So the resurrection will not be a return to the previous life, but moving on to the new, infinitely greater.

So I will have a real body of my own, but it will not be subject to these laws of nature, as they reign on earth today. Christ, after his resurrection, remained the same man, but at the same time it has become completely different, for his body is no longer subject to the law of death, nor to any other laws of nature. I will be a human being in the full sense of the word. I'll be it, who lived and developed in the human family, he was associated with other people, friendship and cooperation. I'll be it, who worked and enriched himself in love and contributed to others. I will, however ,,a new man in Christ ". It's not important, how God will resurrect me. I believe in His omnipotence and in Christ's victory over death. Important, that it will be me.

By participating in the Eucharistic "Feast of the Lamb", I am receiving the pledge of a resurrection. Do I eat the body of the risen Christ every Sunday? ? Am I being strengthened in my daily life by the hope of my resurrection? ?

"A holy feast, where we eat Christ,

we remember his passion and resurrection,

grace fills the human heart, we receive a pledge of resurrection and future glory ".

1. Like St.. Paul explains to the Corinthians their doubts about the resurrection ?

3. Czym będzie zmartwychwstanie dla dobrych, and what for the bad ?

4. Wyjaśnij powiedzenie : after my resurrection, I will be the same person, and yet another.

58. What is the basis of belief in a universal resurrection ?

3. Wyszukaj w prefacji Mszy św. texts for the dead, that speak of our resurrection.