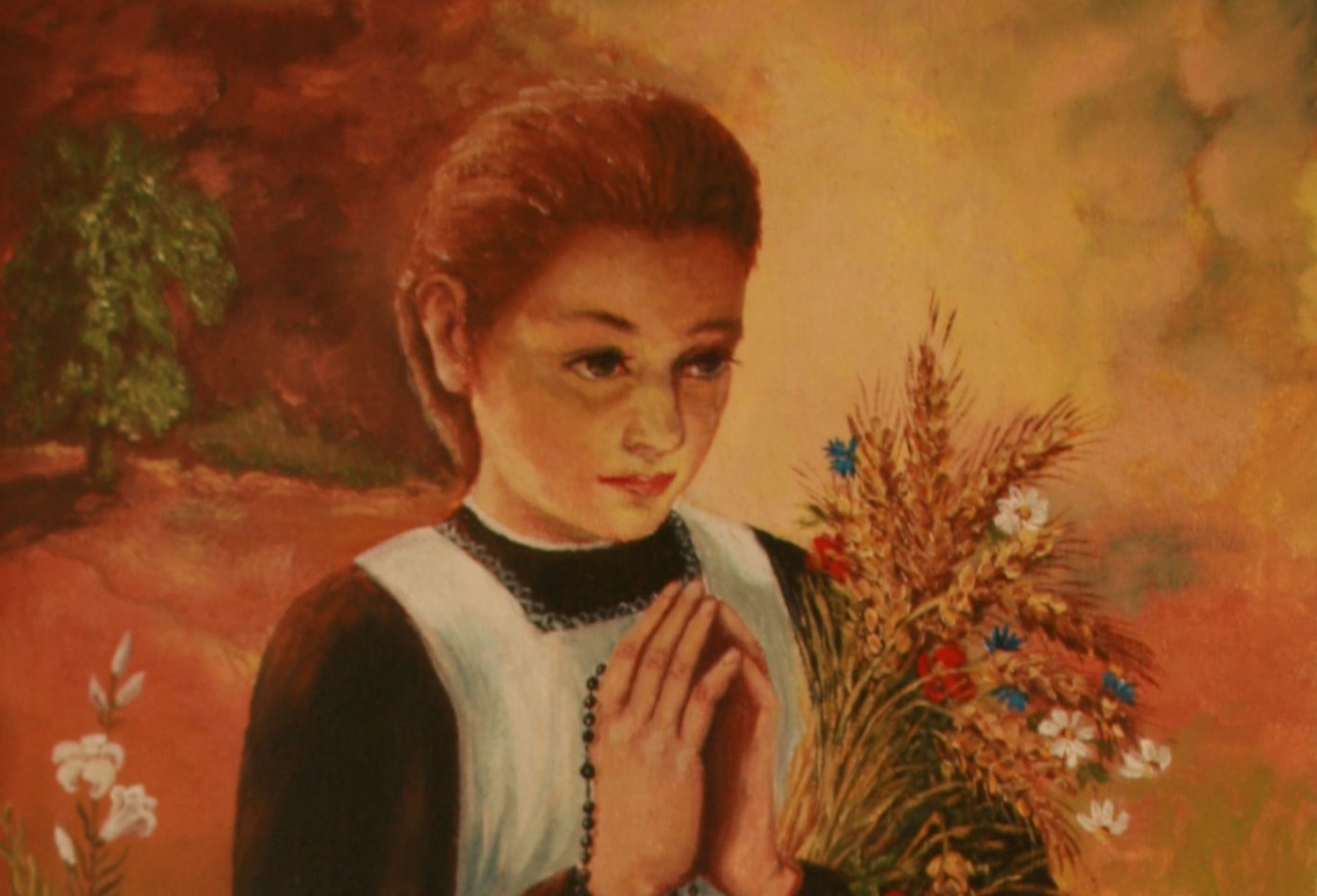 In defense of the dignity of women (Karolina Kózka)

Tam, where the Dunajec flows into the Vistula, among the meadows and forests of the Radłów Region, there is a small village with a slightly strange name : Ruda embankment. Now it belongs to the Zabawa parish. But before, when there was no church in Zabawa yet, all the surrounding villages formed one large parish of Radłów. And the inhabitants of Wał Ruda every Sunday, and sometimes more often, they walked a few kilometers to the parish church, to show God, that they believe in Him and love Him dearly. You can see God accepted the hardships of these people with love. He chose a woman from among them, whose bravery and the love of God made this village famous throughout the countryside.
It was a young girl, Karolina Kózkówna. She was born on the feast of Our Lady of the Angels, 2 of August 1898 year. She had very devout parents and ten siblings, three of whom died in childhood. From an early age, parents trained their children to pray, work and obedience.
Karolina looked no different from other girls. But there was something like that in her behavior, which attracted widespread attention. They tell, that she was very hardworking and willing to do any work, which in such a large family has never been lacking. So she worked sometimes from dawn to dusk. She was also a very good student. The head of the school told, that learning was easy for her, but she wasn't going out of it. Contrary, she willingly helped others, weaker than himself, in doing homework, especially in the teaching of the catechism. In these cases, she even gained such popularity, that parents often referred their children to her saying : "Go to Karolcia, she will explain it to you better ". And that Karolina had a heart of gold in addition to a good head, therefore she refused no one anything, and as she could, so she rushed to help. The neighbors and the parish priest also knew her well. Karolina belonged to various religious groups, such as the Living Rosary, Brotherhood of Sobriety, Apostolate of Prayer and others. She participated lively in various services.
She also liked reading religious books and magazines. Her uncle, Franciszek Borzęcki, he had a library of these books in his own home. Karolina looked at him often and helped him distribute them around the village. She became known to many people as a modest girl who willingly helps others. Everyone respected her for that and trusted her. For example, my mother would leave the house quietly, because she was sure, that Karolina will see to it, so that nothing bad happens. Everyone loved her for her kind heart, for his modest behavior, and also for this, that she was not above the others and did not tease anyone.

Because Karolina did not like to come to the first place and draw attention to herself. She always dressed modestly and poorly, she did not like tinsel. Asked, why doesn't she dress up like the other girls, she replied, that it disturbs her praying. And she knew how to pray. She had learned many prayers by heart. She gladly held various services. She liked praying to the Blessed Mother the most, st. Stanisław Kostka, patron of the virtue of chastity, and to St.. Barbary. As soon as household chores allowed it, she even went to church on a weekday. With your piety, modesty and kindness, she asked for so much help from God, that when the time of trial came, acted like a heroine. She owed this to a truly Christian upbringing in the family home.

And it was like this. When the First World War broke out, The so far silent plains of the Vistula were swarming with troops. There were quarters of soldiers everywhere. Some were leaving, others were coming. They also did not miss the Ruda Embankment. In day 18 November Karolina goes to church, to receive Holy Communion. It is the fifth day when he celebrates a novena to St.. Stanisław Kostka, your favorite Patron. But today her mother does not let her go, because she wants to go there herself. Karolina must stay at home and watch over the children. She's sixteen now, so he can replace the mother.

Around nine o'clock a soldier bursts into the Kózków farm and pretends to be, that he's looking for someone, But he doesn't look around too much, only orders the girl and her father, to go with him to the officer. He led them towards the forest. And when they got there, he dismissed his father, and Carolina rushed on ahead. Karolina did not come back home. Lost without a trace. It was only after two weeks that she was found dead. She was cut, her arms and legs were scratched and muddy. Apparently, she defended herself against the soldier attacking her and defended her girlish dignity.

It was a martyr's death. Karolina loved life, she defended him as best she could, but she loved God even more. For him, she wanted to save her girlish innocence at all costs. Therefore, she was not afraid of suffering, ani ran, that her soldier was inflicting, nor death itself. She gave her life for the love of the virtue of chastity. And God certainly accepted her sacrifice.

And people never forgot about it. When three years have passed since Karolina's martyrdom, pcs. Bishop Leon Wałęga allowed her body to be moved from the cemetery and buried in the square in front of the church. A statue of the Blessed Virgin Mary was placed on the tomb. Who is now entering the church square in Zabawa, sees her grave. He is reminiscent of this heroic martyr of chastity and this, because of God and His commandments you have to love more than your life.

Although more than fifty years have passed since then, Karolina's fame does not fade away. On the contrary - more and more people are writing and talking about it. Many pray to her, reverently keeps a picture with her image. People, who received some grace through Karolina, thank you publicly for it. There is even a special book, in which these thanks are written. You see her soul is nice to God, if he can ask him so much. Therefore, Fr.. bishop Jerzy Ablewicz, Ordinary of Tarnów, asked the Holy Father, that Carolina be proclaimed blessed.