In Jesus Christ, God the Father reveals his saving love for mankind 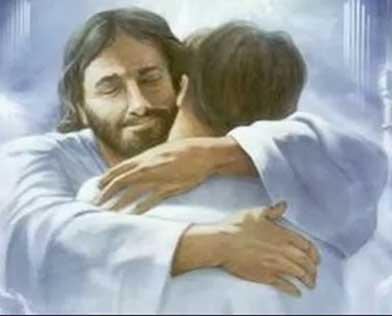 Sometimes parents give up their children, because their expectations had failed. The teacher turns away from the bad student, who neglects duties, his orders and advice. But you know, that there are also such parents, who never cease to love even a degenerate child. Perhaps you know teachers who are patient and understanding, down to the last. How God Works ? What about God, our Father, Jesus Christ reveals to us ?

Jesus in everything, what he did, he showed great love for people. "He has gone through life doing good" (Dz 10, 38).
People often despise certain jobs. They reluctantly relate to these, who carry them out. They make fun of handicapped people. They move away from people who have multiple addictions or commit sins. This was also the case in Palestine. The Pharisees despised tax collectors and sinners.
Jesus Christ did otherwise. He was not underestimating anyone. He respected every person and every job. He could see value even in these people, which people despised. Jesus, like a good doctor, helps in the first place, who are spiritually sick. He told the paralyzed man : "Trust my son, your sins are forgiven " (Mt 9, 2). And the sinful woman in the house of Simon said : "Your sins are forgiven" (Luke 7, 48). That is why he was happy to be among the weak, sinners, among the despised customs officers. He even chose his students from among them. “By leaving there, Jesus saw a man sitting at customs, named Mateusz, and said to him : "Follow me". He got up and followed Him. When Jesus was sitting at home at the table, Many tax collectors and sinners came and sat with Jesus and His disciples. Seeing it, the Pharisees spoke to His disciples : «Why does your Teacher eat with tax collectors and sinners ? » On, having heard it, he said: «Healthy people do not need a doctor, but these, who are sick. Go and try to understand, which means : I want mercy rather than sacrifice. Because I have not come to call the righteous, but sinners »" (Mt 9, 9-13).

Jesus reveals the mercy of the Father

This action of Jesus was condemned by the Pharisees. Jesus responded to their accusations and criticism in parables.
“All the tax collectors and sinners were drawing near to him, to listen to him. At this the Pharisees and scribes murmured: "He welcomes sinners and eats with them". He then told them the following parable : «Which of you, when he has a hundred sheep, and he will lose one of them, does not leave the ninety-nine in the desert and go for the lost, until he finds her ? And when he finds her, he happily takes it on his shoulders and returns home ; he invites friends and neighbors and tells them : ,Rejoice with me, because I found a sheep, which I lost ’. I tell you : Likewise, in heaven there will be greater joy in one sinner, who converts, than the ninety-nine righteous, who do not need conversion. Or if a woman, having ten drachmas, he will lose one drachma, does he not turn on the light, he doesn't sweep the house or look carefully, until he finds her ? And having found her, she invites her friends and neighbors and talks :
“Rejoice with me, because I found a drachma, which I lost. Just like that, I tell you, joy arises in the angels of God out of one sinner, who converts »" (Luke 15, 1-10).

In the Gospels, a description of Jesus' goodness to sinners and parables, you just read, are closely related to each other. And in Jesus' dealings with sinners, and in his words the eternal love of God for man is revealed, even sinful. In Jesus Christ, God comes to meet every sinner with forgiveness and mercy. He gives power and strength even to the greatest sinner, that he would abandon his sins and turn to the living God. Clearly, the saving love of God the Father was revealed in the death of Jesus Christ. St.. Paweł says so about it : ,,God shows his love for us (just) thus, that Christ died for us " (Rz 5, 8). St.. John explains to us even more clearly, that "God first loved us" (1 J 4, 19) and "He sent His Son as an atoning sacrifice for our sins" (1 J 4, 10). God's saving love, which was revealed in Jesus Christ, works today in the Church. The Word of God preached in the Church is Good News preached to all people, especially poor and abandoned sinners. Already in the sacrament of baptism, God forgives the sinner and bestows his love on him. In the sacrament of penance, the merciful Father welcomes the prodigal son. In the Eucharist the sacrifice of our salvation is made present "for the forgiveness of sins", and man connects to the Father in the most perfect way.

When on the twenty-fourth Sunday in ordinary time (year C) during the Eucharistic Assembly you hear the parable of the Good Shepherd, then God reveals forgiving love to you and calls you, that you would trust her completely. You should cooperate with this love, that there may be a complete conversion in your life, that is, getting closer to God and true union with Him. At the same time, Christ is calling you, that you, too, show love to everyone ,,your culprits ".
How often do you go to the sacrament of penance, in which you meet the forgiving God in a special way ?
Have you tried to make it easier for someone close to you to come back to God by showing His goodness and mercy? ?
God is full of mercy. His love embraces everyone. Pray to Him with the words of the collection on the tenth Sunday of the year :
"God, who show your omnipotence most by forgiving and having pity, increase in us the graces of Your mercy, that by running towards Your promises we may become partakers of heavenly goods ".

Read the chapter 15 from the Gospel of St.. Luke and answer, how God deals with sinners ?