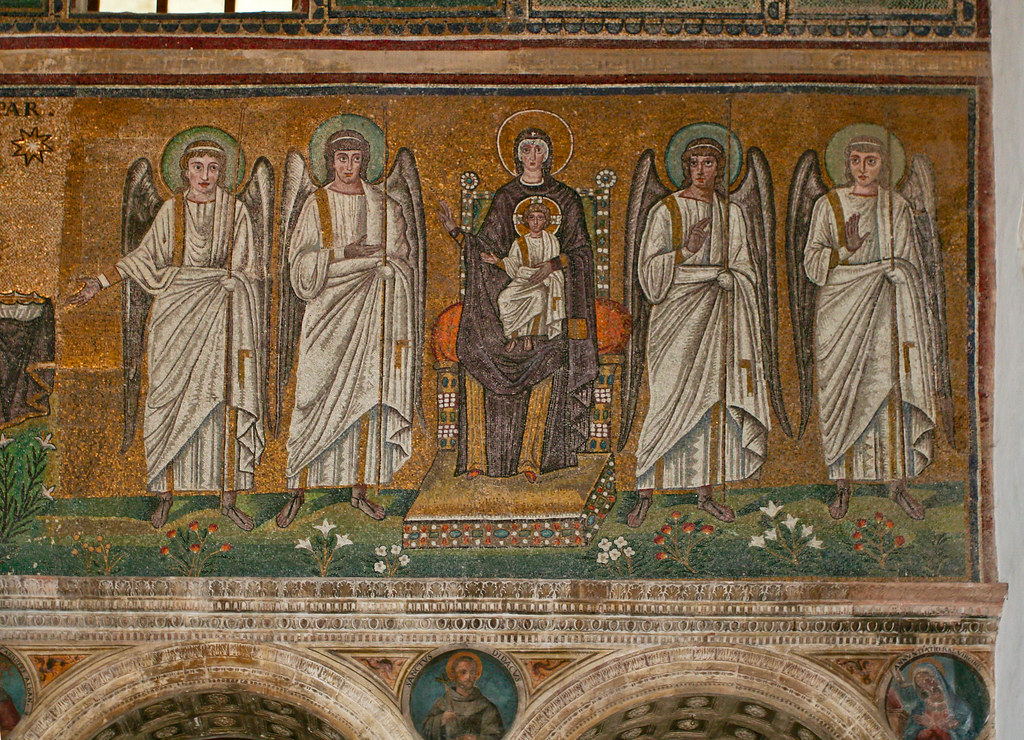 Theotokos
In our churches, houses, and even along the roads, pictures and figures of Jesus with His Mother are often placed. Why is it like that ? Who She is for Jesus Christ, God-Man ? Why are such figures and pictures so often found? ?

"He was born of the Virgin Mary"

During the second Mass. on the celebration of Christmas, and then on the eighth day thereafter, i.e.. 1 January, on the feast of the Holy Motherhood. Virgin Mary, we read the same Gospel. It tells us about Jesus and his mother :
,,They also hurried away and found Mary, Józef and the baby, lying in a manger. When they saw him, they told about it, what was revealed to them about this Child. And everyone, who heard it, they wondered about it, what the shepherds told them. But Mary kept all these things, pondering them in her heart. And the shepherds are back, glorifying and praising God for everything, what they heard and saw, as they were told " (Luke 2, 16-20).
The shepherds saw the Child in a manger, Mary and Joseph, but when they were instructed by God, they saw in Him the promised Savior. They were amazed, that this little Child is the Savior of the world. However, everything, what they heard from the angels, they repeated to other people. The evangelist passes, that Mary listened to these words attentively, she compared them with the words of the angel at the Annunciation and with the words of St.. Elizabeth. She understood even more precisely, who is her son. St.. Luke tells us in the words of the Gospel, what Mary and the shepherds could see, and what they accepted in faith.
When we read this Gospel on the Feast of Motherhood of St.. Virgin Mary, we wonder, what we believe in, when we consider the Motherhood of Mary.
Every child has a mother. She conceived them and gave birth to them, she gave him a name, he educates and cares for him in a special way up to adulthood.
Mary gave birth to Jesus nine months later, just like any mother. In her motherhood, however, Mary remained a virgin. Jesus had no father on earth. Joseph was only his protector and provider. Mary conceived Jesus by the power of the Holy Spirit, she became the Mother of the Savior, as St.. Luke.
St.. many times he calls Mary "the Mother of Jesus". Because Jesus Christ is the eternal Son of God and the true God, hence we speak of Mary, that she is the Mother of God or the Mother of God.

Honor Mary as the Mother of God

The People of God began to worship Mary as the Mother of God from time immemorial. Already at the Council of Ephesus, in year 431, The church solemnly announced, that Mary is the true Mother of God. This declaration was an expression of the faith of all God's people. The same faith is also expressed in the old Christian paintings preserved in the catacombs. They show Jesus his mother next to him, Mary. Looking at these pictures, we learn about the faith of the early Christians in the unity of the Mother with the Son in the work of salvation.
Polish people, who have believed in Christ for a thousand years, they also honor His Mother, The Mother of God. Their faith and devotion to her protection are expressed in the oldest Polish song "Bogurodzica". This song was for many centuries the national anthem of Poland. Everyone sang it, especially the knights before the start of the battle, e.g.. near Grunwald.

Jesus was born of Mary. She as -Mother was the closest person to him. He loved her, and he showed his love in words and deeds.

And how do you love her ? How is your love for the Mother of God expressed? ?

You will show your love to Mary, as you do the will of Jesus by word and deed, Her son. You will express your love for Mary above all through a strong faith in her Son, Jesus Christ, and in her divine motherhood, as Pope Paul VI did :

"We believe, that the Blessed Virgin Mary,
always a Virgin,
she was the mother of the incarnate Word,
Our God and Savior Jesus Christ,
tied together by a tight and unbreakable knot
with the mystery of the Incarnation and Redemption”
(Paul VI's Creed).

24. Dlaczego Maryję nazywamy Bogurodzicą ?
We call Mary the Mother of God, because she is the mother of Jesus, God-Man.

25. W czym uwidacznia się wiara Ludu Bożego w Macierzyństwo Maryi ?
The faith of the People of God in Mary's motherhood is revealed in the liturgy, in art and literature.