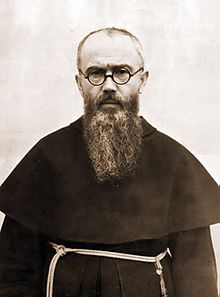 „…The next day, during the roll-call, Commander Fritsch announces : the fugitive was not found - For punishment, ten of you will die in the starvation bunker. He walks slowly down the line and points with his finger : this one and this one here. Another one. Step out of line. There are ten. Suddenly, sobbing is heard in the group of inmates : Poor my wife, my poor children ! I will never see you again ! The rest are relieved. This time they missed their terrible death. Suddenly among the survivors 14 block produces a strange motion. Someone is pushing forward, comes out of line. He walks towards the camp commandant. Well that ? What does he want ? Fritsch grabbed the revolver. He took a step back ! Screams! What he wants is a pig ? Father Maksymilian in his striped uniform is standing in front of him, smiling : - I want to go to death for one of the condemned - Who do you want to die for ? - Here it is. He has a wife and children. Father Maksymilian pointed a finger at the prisoner, who was sobbing so excruciatingly a moment ago. Who are you ? - The answer is short and clear : - Catholic priest. Another moment of silence. He spat out finally, as if in spite of itself, in a hoarse voice - Good. Go ". In day 17 October 1971 r. St.. solemnly proclaimed Father Maksymilian Kolbe - martyr of the concentration camp in Oświęcim - blessed. It is worth taking a closer look at this extraordinary figure, which is said and written about all over the world today. it is true, that Father Kolbe is known to people most often because, that he was made like Christ through his life, especially since he fulfilled his call : „…That you love one another, as I love you " (J 13, 34). It was the last act of his life, heroic, extraordinary. But at the moment he worked for many years. Father Maksymilian Kolbe's whole life was an uninterrupted streak of change, daily victims, which prepared him for such an end.

Father Kolbe devoted his entire life to spreading the veneration of the Immaculate, of which he was a great worshiper. So after returning from Rome, where he studied and was ordained a priest, publishes a monthly ,,Knight of the Immaculate ". Soon he starts building a monastery, which was most likely the largest monastery in the world (762 monks in 1939) and a powerful publishing center (7 Catholic writings) in Niepokalanów near Sochaczew. The monastery still exists today. He did all this for the Immaculate. No victims scare him, no efforts, as long as the Immaculate One was known all over the world. Her name is famous in Japan, where in 1930 r. sets up a mission and publishes "Knight of the Immaculate" in Japanese. After working in Japan for six years, Father Kolbe returns to the country.

In his apostolic work, he uses the most modern achievements of technology, sparing nothing, even health severely damaged by tuberculosis. Father Kolbe used to say, that we should use the latest technology for apostolic purposes, because there is so little time, yet we cannot stand barely before God.

The figure of Father Kolbe is known to so many people today not because of his energy and apostolic zeal, but thanks to one heroic deed, which was voluntarily giving up his life for a fellow prisoner. Eyewitnesses, including this one, whose life was saved by Father Kolbe by voluntarily sacrificing himself, they tell, that this silent Franciscan friar only paid for everything with one coin: prayer. He prayed for everyone, with no exception, especially for these, with whom fate connected him. He prayed for his executioner, who, for a confession of faith, beat him so badly. And when the beaten unconscious was placed in the camp hospital, and it is in the corridor by the front door, even there he prayed for others. Enjoyed, that it is at the door that it is easier to come to the aid of others, especially by confession. In every place, he resembled the suffering Christ, who set an example, how to love everyone to the end.

He went to death by starvation for the father of the family, because he could really love another person. Through his life sacrifice, he not only saved the life of another prisoner, but he also strengthened faith in the final victory of good over evil.

In all textbooks for teaching religion, the figure of Father Kolbe as a hero is shown, who did not hesitate to lay down his life for another human being.

Father Maksymilian Kolbe proved by his deed, that Christian optimism makes sense even then, when it seemingly appears, that evil wins. In the end, good always prevails.

We also invite you to: Biography of Maksymilian Kolbe