All people are brothers 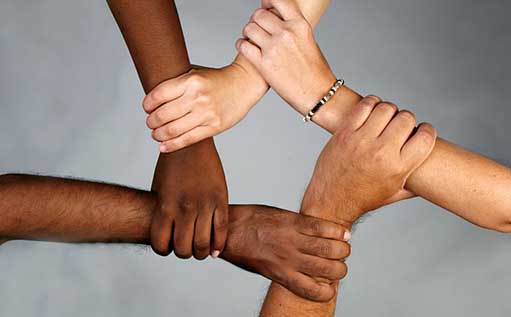 People of all races and nations meet frequently, e.g.. at various sports events. They also meet each other during trips to different countries, during joint summer camps for children of many nationalities. Young people are eager to establish contacts with their peers and friends from other countries. He exchanges postcards among himself, stamps, letters. When a country is hit by misfortune, e.g.. an earthquake or a flood, then people from all over the world try to come to his aid, although they do not know him closely.
What prompts people to do so, to be interested in others, make acquaintance with them, work with them, play and visit ? Or just plain curiosity ? Or maybe something more… ?

We are very much alike, especially externally, yet each of us is a different person. So we ask a question :

Today people have many opportunities, to get to know each other better than before. Radio, television, press, the books show people from other countries and continents. They inform about their lives, appearance and habits. Getting to know people from all over the world is easy to spot, that there is something, what they all have in common. Man can communicate with man, exchange your views, share the cultural and civilization heritage. We then realize, that we are all human. It is humanity that is the basis of unity between people.

People are different : outward appearance, skin color, Language, national customs, religious beliefs, political, etc.. These properties basically only distinguish people from each other. It does happen though, that they become a source of confusion and hostility. Sometimes there are disputes and wars on the grounds of nationality or race. Many whites are hostile to peoples of color. And vice versa : peoples of color have an aversion to whites. Despite these misconceptions, people make a lot of effort, to remove hostility from relations between races and nations. Sometimes, misunderstandings arise between people on the basis of differences in political views and in state interests. Sometimes these disagreements also lead to wars. But basically people don't want war. They consider it evil. More and more countries are striving for lasting peace, reconciliation of political views, mutual understanding and respect.

"One is your Father"

The Church is also making efforts, that there would be fraternity among people in the world. Popes have made such efforts in recent years : John XXIII and Paul VI. They turned to all people, calling for reconciliation and consent. The Second Vatican Council recalls, that all people are to be brothers to each other. And he addresses especially members of the Church, that they form a fraternity and thus make it visible to all people, how to love one another.

This fraternity then becomes fully manifest, when the People of God gathered around the altar together with Christ present the Holy Sacrifice to the Heavenly Father. Then everyone is praying together to God, his father, and before Holy Communion. they give each other a sign of peace as an expression of brotherhood and unity. They do it over and over again, because there can be divisions even among communicators, disputes and misunderstandings. Therefore, it is necessary to remind again and again, that all people are brothers and fulfill Christ's call for brotherly love.

You are a human, brother of all people. Through your baptism you joined Christ - our Brother. You were then called to cooperate in uniting all people. God expects from you, that you will spread brotherhood, also among my loved ones. You will clear up misunderstandings, he mitigated disputes, that happened. Commend to God in prayer all people as your brothers.

Consider the lyrics of the song :

“Our life is spent among people,
You leave your mark in every heart.
After that, he will know the world of Christ's disciples,
That they always want to remain in love.
No man can be a stranger,
God came into the world for everyone.
He gave his life for each of us.
So let's make love, because it connects us -
One heaven, where are we all going,
One Mother, which guides us,
One happiness, which we want,
One God, which is in each of us.
Do you know, why your neighbor is sad today,
And what is the little brother worried about today ?
Human cares are your cares,
Who loves, this one remains in God ".

1. Należę do wielkiej rodziny ludzkiej. Do I do that, that other people would be comfortable with me ?

2. I am Christian. I'm talking to God : ,,Our father". Do I feel like a fraternal fellowship with all people when I say this prayer? ?

3. Chrystus jest Bratem wszystkich. Through baptism, I became a brother of Christ. Can I and try to be a brother to all like Christ? ?

4. Czy nie żywię niechęci do innych ras, nations ? Do not share racial, national, and even religious prejudices ? Have I thought, that the beginning of my prejudices may be my dislike of other colleagues, to children from another school, from another street or from another village or city ?

26. Ludzie całej ziemi są braćmi, because they are all human and they are all children of one Father, and the Son of God became man, to save everyone.

1. Write, ,,What should be done, that all people really get to know, that they are brothers " ?